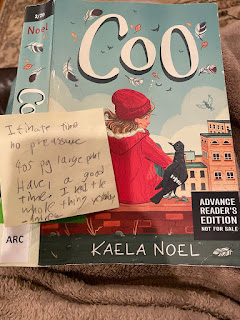 I have been so fortunate this year to have a student who loves to pass me the books he is reading. They always come with a little note, like the one in the picture above. Coo is the story of an abandoned baby who is rescued by some pigeons. When her pigeon father figure gets hurt, Coo decides to trust a woman named Tully who has rescued pigeons before. Once Tully meets Coo, she decides to rescue her as well. As my student suggested, I did have a good time reading this book. I love the way the author portrays the relationship between Coo and her pigeons and the people she meets as she learns what it means to be human. 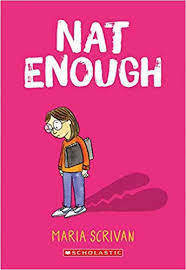 Another book my student brought me this week I'd been looking forward to for a long time. Nat Enough is the new graphic novel by Maria Scrivan, a local cartoonist. It's the story of a girl name Nat who is looking forward to starting middle school with her best friend, but as happens, her "best" friend has decided to become popular and now treats Nat in ways that aren't friendly, writing her nasty notes and teasing her in front of others. Nat has to find her way and realize she is more than enough. Nat Enough releases on April 7 and will be loved by graphic novel lovers of every age.

I adore fractured fairytale series, so I was thrilled to find the Princess of the Midnight Ball series. The series starts with a twelve princesses who are forced to dance each night with the sons of the King Under the Stone. In the first book, the kingdom is going to ruin because the princesses have been accused of magic. It will take the courage of all the princesses, especially their oldest sister Rose and a young soldier named Galen to save them. 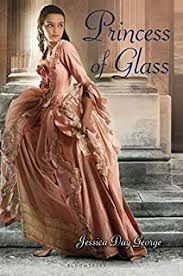 The second book in the Princess of the Midnight Ball follows Princess Poppy as she goes to another kingdom on a mission of good will after the events of the first book. Poppy quickly recognizes things are going magically wrong in this kingdom when a servant girl named Ellen shows up at a ball in a magical gown with glass slippers and all of the men can think of no other. Aided by Ellen's former friend who can also see through the illusion, Poppy must rescue Ellen and the kingdom from evil magic. 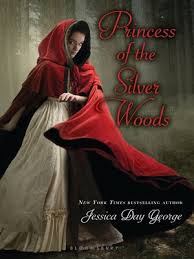 The final book in the series follows Princess Petunia, the youngest of the twelve sisters. On her way through the woods she meets a wolf who accidentally kidnaps her. The wolf is a boy named Oliver who has been forced to live in the woods with his band of merry men, stealing from the rich and giving to the poor, because his own lands were given away quite mysteriously. Little does Oliver know that his own troubles are connected to Petunia and her sisters and the Kingdom Under the Stone. I wish this wasn't the last book. I would have enjoyed reading one on every sister.

Stacy Barnett Mozer is a teacher and a middle grade author. If you like what she's been reading follow her on Goodreads. Please leave a comment below.
Posted by S. Mozer at 12:24 AM 6 comments: