Interview With YA and Middle Grade Author Sarah Darer Littman 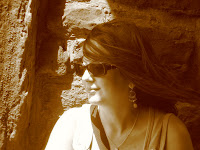 Sarah Darer Littman, writer, mother, and unpaid chauffeur, is a living example of the cliche, "Life Begins at 40." After spending much of her adult life doing things she didn't really plan to, including such diverse occupations as financial analyst and farmer's wife, she at long last found her true calling as a writer. She indulges her adult voice as a columnist for the Stamford Advocate/Greenwich Time newspapers.

When did you decide to become a writer?
I wanted to be a writer when I was in high school, but when I thought I would go to college and major in English and write the Great American Novel, the message I got from my parents was "Uh, dude..." (well, actually, they didn't say "dude" because my parents don't speak that way) "How are you going to make a living as an English major?" I didn't have a good answer so I ended up on a completely on a completely different track - Wall St, MBA in Finance and then, believe it or not, living on a dairy farm in rural England and helping to run a cheese making business. But all along, there was this little voice inside me whispering that I should be writing. Finally, a few years before I turned 40, I started listening to that voice. I realized that I didn't want to be in my nursing home at the end of my life thinking "What would have happened if...?" I had to at least try to write, even if it was a total failure. So I started taking some adult ed classes and giving myself time to experiment with it.

How did you go from aspiring writer to published author? Was it luck or hard work?
Hard work, serendipity and research. My first novel for kids, about a runaway school hamster, will never see the light of day, but it was a good practice novel. I also wrote 200 pages of a grown up book that will also probably never see the light of day, at least in its present form, but it helped me develop my skills as a writer. I kept taking classes though, and ultimately went to Writers Week at Manhattanville College, where I was fortunate enough to take a workshop in writing for children with the late great Paula Danziger. I took a chapter of the hamster book, and Paula told me that I had talent, but that I should start something new. It was in her class that I came up with the idea for CONFESSIONS OF A CLOSET CATHOLIC. I went home one night and wrote the first page, came in and showed it to her and she said, "Yes - this is it!"

I wrote the whole book and when I was almost finished with it, I went to my first SCBWI conference in New York. There, I went and listened to several editors talk about their interests. I knew that whoever was going to buy a book about a girl giving up being Jewish for Lent was going to have to have a quirky sense of humor. When I heard Julie Strauss-Gabel speak, the first slide of her presentation was a picture of herself in the high school band, with all these blonde girls playing the flute and herself, frizzy darked haired playing the drums. She said, "This is who is reading your manuscripts". Right then I knew that she was someone I wanted to work with - because my book was all about that kind of girl.

When the book was finished and polished to the best of my ability, I sent it off to her. I also sent it to a friend of mine who worked for Harper Collins in sales who'd offered to read it (they didn't take unagented submissions) saying that if she liked it, maybe she could pass it on and if not, don't feel obligated. And then I sat back, expecting to wait for six months and be rejected by both, because I have such great self esteem ;-)

Three and a half weeks later the phone rang, and it was Julie Strauss-Gabel. I almost couldn't talk, I was so shocked. She asked me if I was willing to make revisions (um, let me think...yes!) and then offered to buy the book. I hung up and started screaming and dancing around the kitchen. My kids thought I'd gone insane!

The serendipity part was that completely unbeknownst to me, Julie had been looking for a book with Jewish content. She'd said so at several conferences and had been inundated with things that didn't work so she'd stopped mentioning it. So she was really happy to find a book that did work.


How did you come up with the idea for your latest novel, LIFE AFTER?

The story of my upcoming book, LIFE, AFTER is an interesting one, because it grew from failure. During my lengthy "second book blues" period, I'd worked on three chapters and an a synopsis for a book called A DIFFERENT DRUMMER, about a boy with Aspergers Syndrome, something that I'm familiar with because my son was diagnosed with it when he was five. We submitted it but my then editor felt it was too much like A CURIOUS INCIDENT OF THE DOG IN THE NIGHTTIME and rejected it. I was dejected, but went back to the drawing board and worked on some new ideas. A few months later, my editor heard the StoryCorps interview my son did of me (broadcast on NPR and called my agent, suggesting that maybe we could revisit the idea for that book, but perhaps from the voice of the sibling of the kid with Aspergers.

I'd just read the ARC of Cynthia Lord's RULES, so I knew that had already been done and done brilliantly. But I started thinking about my own son and how in elementary and middle school, he'd tended to gravitate towards kids from South America, and I wondered if perhaps it was because they too, weren't the "typical American kids" and also had problems with idiomatic speech, although in their case it was because English wasn't their native language. I also wanted to explore something that had frustrated me when 9/11 happened - that it was as if many Americans only then appeared to recognize the existence of terrorism. I'd grown up in England during early 1970's during the IRA bombing campaigns and being aware of terrorist threats was part of our way of life. I have cousins in Israel for whom this continues to be a way of life. It's not that you let it dominate your existence, but you are always vigilant and aware.

So when I picked the South American country for my main character I chose Argentina, because I wanted her to have lost a family member in the bombing of the A.M.I.A. (Jewish Center) that took place in July 1994.

I wrote a synopsis and some sample chapters to apply for a SCBWI WIP grant, but never really connected with my main character. In the end, I went to the Kindling Words retreat, shortly thereafter, and decided to write PURGE instead. This book idea got put in a drawer and probably never would have seen the light of day if it hadn't been for a wonderful woman called Claudette Greene, to whom LIFE, AFTER is dedicated.

About the time I was trying to figure out what to work on for my third book, I met with a local mother/daughter book group that had read CONFESSIONS. It was great fun, and afterwards, Claudette, one of the moms, wrote to thank me. She told me that her daughter had become interested in writing after she lost her dad on 9/11 and asked if I'd ever considered writing a book about it, because there just wasn't anything out there for teens at that point. I took my synopsis out of the drawer and e-mailed it to her and she told me I should write the book. I ended up including it on a list of proposals I gave to my editors at Scholastic and they liked it, but thought it should be YA rather than middle grade. When I went back to the book, having met Claudette and heard her story, I felt so much more of a connection to the main character, and a greater passion for writing the story.

What do you feel you do best as a writer? What do you still need to work on?
I think I've created some great characters. I'd love to learn more about plot and pacing. I'm hoping to get the opportunity to take the Robert McKee Story seminar at some point in the near future. But it's hard to take that time away when you have kids and you're a single mom.


What are you working on now?
I just turned in a manuscript for a book that's coming out from Scholastic Press in 2011 called WANT TO GO PRIVATE? It's about a girl who becomes involved with an Internet predator. That's been the most difficult book I've written so far. My daughter would come home from school and I'd just have written a chat scene between the girl and the predator and I'd say to my daughter: "Stay away from me, I'm a perverted man right now!" It really started to do my head in after a while.

I've also just started something new, but I'm too early in the process to want to talk about it. But it's something different. I'm very excited about it, because I'm always looking to grow as an author. I guess you could say I'm learning on the job!

Thank you so much Sarah for answering these questions. I am looking forward to reading LIFE, AFTER which will be released on July 1, 2010.

Hope you liked the interview. Comment below for a chance to win a signed copy of Purge by Sarah Darer Littman
Posted by S. Mozer at 7:55 PM